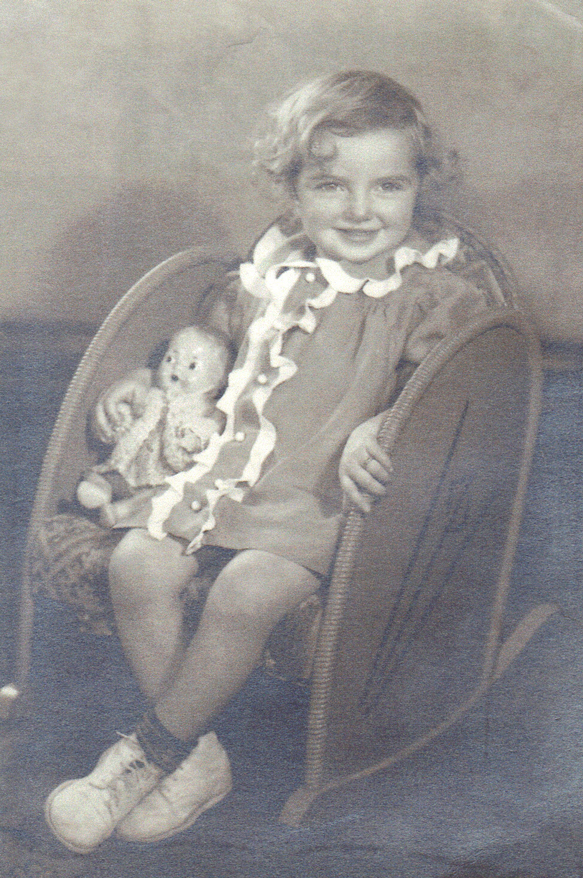 It’s been said in our family that the prince married the princess.

This year, the princess—Elaine—is having her birthday on a special day. It’s the same day as our family reunion! And because some of you attendees may not know Elaine, or those of us who do, may not know her as well as we think, this week’s post is dedicated specially to her.

Back on June 16, 1936, when Jerry was just a few months old, a baby girl was born to Norris and Inis (Franklin) Hotchkin, of Lansing. They named her June Elaine, and she immediately decided to go by Elaine.

Elaine had two brothers; Norris, Jr., who was 11 years older; and Don, who was eight years older.

“Because of the age difference between my brothers and I, and being the only girl, that made me the princess,” says Elaine. “Norris and Don were always good to me and I was included in some of their things that maybe if I had been closer in age, I wouldn’t have been.” 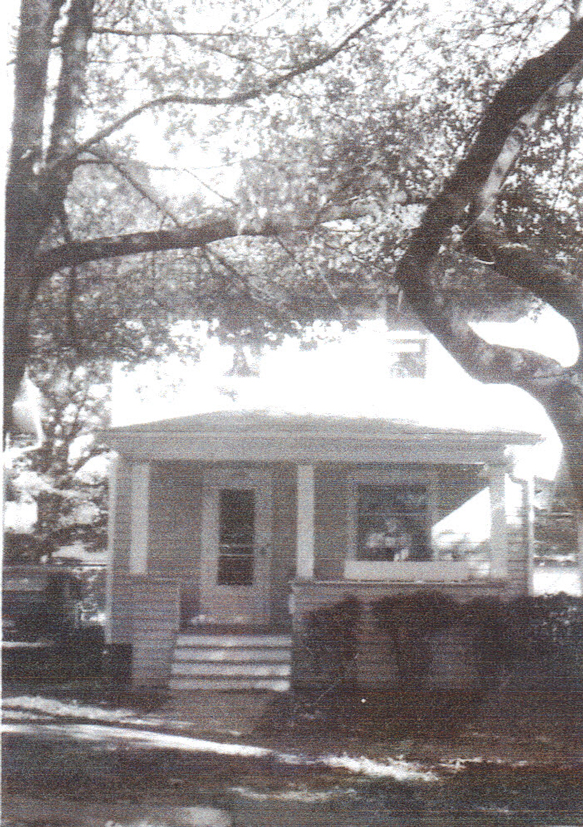 Elaine’s dad worked as a toolmaker for Lansing’s Oldsmobile. Her mother was a housewife.

“Her home was her castle and her family was all-important,” says Elaine. “I’ve always said I could tell what day of the week it was by what task she was doing that day. I was never that disciplined. I’m still not.” 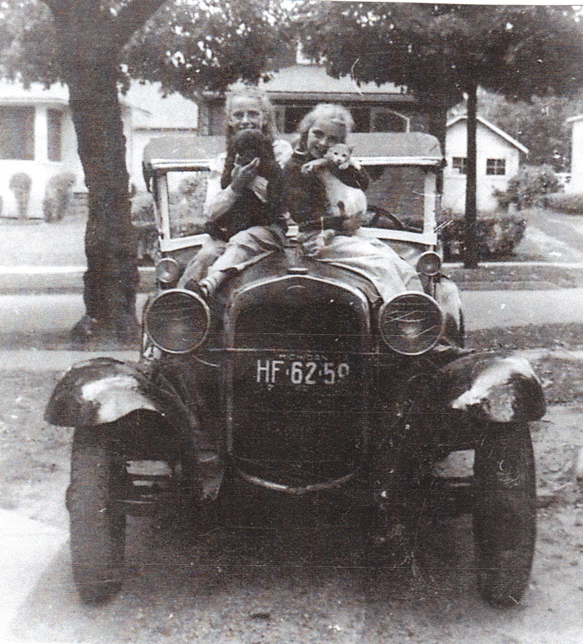 Growing up, Elaine had a busy life with all her neighborhood friends, of which she was still the youngest. She talks about playing the same games the Amos Boys did (although surely in a more respectable manner)—games like Kick the Can, Hide and Seek, Ante I Over (throwing a ball over a garage roof and running around both sides to catch it) and softball.

“Sidewalk roller skating took up a lot of my summer days,” says Elaine. “And if it rained we played barefoot in gutters of the street where the water ran down to the sewers. I lived in that neighborhood from the time I was 4 until about 15.”

If we remember back, Jerry told us he met Elaine at a junior high dance. Elaine tells us more.

“When I met Jerry we were in the seventh grade. It was April, and the YWCA in downtown Lansing had Friday night teen dances,” recalls Elaine. “A girlfriend of mine from my neighborhood and I went. It was a time when girls could walk safely the almost-two miles from my home to the YWCA.

“Someone I knew was with Jerry and we talked, and Jerry offered me a pop. After the dance my friend Barbara and I walked back home, and Jerry and his friend followed us. I think it was weeks before he could remember my last name.” 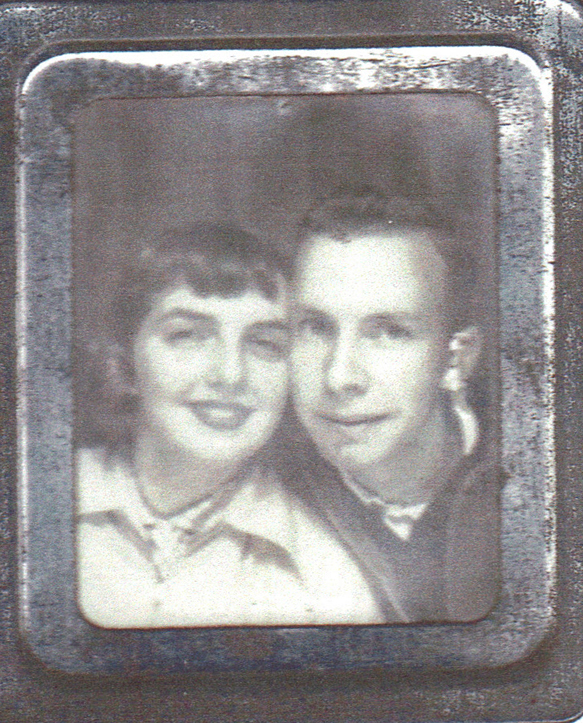 From then on, the Hotchkin household took on a new fixture—Jerry.

“We got a television fairly early on and Jerry would come over and watch,” says Elaine. “I don’t know if it was me, the television or my mom’s cooking that he was most interested in!”

Those who know Elaine, know her as one of those industrious, go-to women—if you want a job to get done, you go to her. Apparently, this started way back in high school. When she was 16, she started working for a dry cleaner, first behind the counter and later in bookkeeping.

She also worked in her high school’s co-op program.

“I went to school half a day and worked the other half,” says Elaine. “I worked for a finance company that made small loans. Five hundred dollars was the top amount, which now seems a small amount, but at that time you could buy a new Ford sedan for $2,000.”

After high school Elaine worked as a payroll clerk for the Lansing board of education. She and Jerry were married in 1957, and she continued working there while he finished his senior year at Michigan State.

And then came the girls!

In 1959, Jerri Lynn was born. In 1961, Jennifer was born. Elaine began her career as a stay-at-home mom and no longer worked outside the home.

“I should say I did not work for a paycheck,” says Elaine (she says this in an email, but I can picture her laughing).

Once again, anyone who knows Elaine, knows she didn’t just sit at home ironing little girls’ dresses. How’s this for a resume…

For many years she served on the township park board, where she was secretary, treasurer and president. She scheduled activities. She helped acquire a federal grant to develop a park over a former landfill. And she was chairman of the Labor Day Chicken Bar-B-Que, complete with games, beer tent and music.

And then there were the Girl Scouts!

“Girl Scouts were a big part of my time away from home,” says Elaine. “My friend Donna Wells and I had a troop from Brownie Scouts 3rd Grade to Senior Scouts thru 12th Grade. Our meetings were Mondays after school and Jerry could never remember where I was on Monday afternoons. But he always supported us girls in all our activities.”

Once again, Elaine got the job done. Over the years her troops raised money for a trip to Chicago and another to historical sites out east. They also went camping several times a year, where the girls learned the fine art of outdoor living.

“We were a close group and some years after I would receive Mother’s Day cards from some of the girls,” says Elaine. “Later I saw one of the scouts and she told me scouting was greatest thing during her childhood and the songs she sang and taught to her children were the ones our troop sang.”

When Jennifer went to college, Elaine went to work (like, duh, what had she been doing all those years?) She took a paying job with a moving company, where she worked for 25 years as a bookkeeper and many other roles.

“During some of those years he had two companies and I did the books for both,” says Elaine. “I bought a truck and the company leased it from me.”

So what’s with the prince and princess bit?

When I talked with Elaine on the phone, she mentioned a thought she and Jerry had together. Looking back, Jerry also was a youngest child. And being the only one of the Amos Boys to live with his maternal grandparents, he was the sole recipient of their doting (albeit sometimes drunken) attentions.

“Jerry says it’s a case of the prince marrying the princess,” Elaine laughs. “It’s amazing we’ve gotten along so well all these years!” 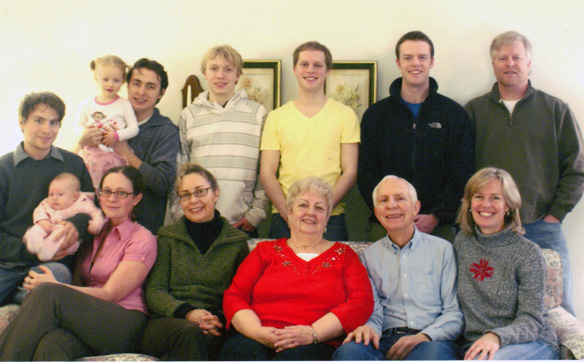 Nowadays Elaine enjoys being a mom, grandma and great-grandma. She and Jerry have this awesome family together, some who live in the area and some in Chicago, and they maintain a wonderful closeness with all of them.

“Looking back and forward, I think my goal all along has been to be a mother, grandmother and great-granny,” says Elaine. “I want to be a part of all their lives.”

This princess has accomplished her life’s goal and so much more.